Top 5 Countries to Study in Europe: Universities, Cost of Living

Millions of international students head to Europe every year to pursue their higher education. You will gain extensive experience, personal and professional studying in a foreign nation. European countries offer world-class education and research opportunities and a wide range of education options. Most European countries are easy to travel to from India as well. Keep reading to learn about the top countries you can choose to study in Europe. Austria Austria is a landlocked nation in Northern Europe. It shares its borders with Germany, Hungary, Slovenia, the Czech Republic, Slovakia, Switzerland, Italy, and Liechtenstein. It is also a world-class tourism destination, thanks to the Austrian Alps. Living in Austria Austria is home to some of the finest universities in the world. Small but populous, Austria is one of the best countries to study in Europe. The cities are stunning, and the landscape is even more so. Also, your average month would cost you only ₹ 78,435 in Austria. 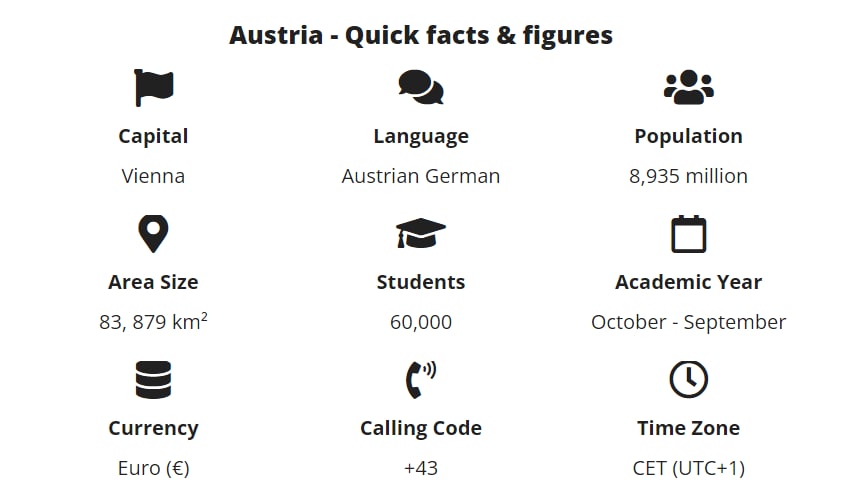 Universities in Austria Austria offers six types of higher education institutions, namely, You can see that you have plenty of choices when picking a university. In addition, education is quite affordable in Austria. As a non-European student, you can expect to pay ₹60,000 per semester on average as university fees. Some leading universities in Austria are, The University of Vienna is Austria’s leading university in terms of global ranking. It is also the largest and oldest university in Austria. You can get an exemption from university fees in Austria if, Most university programmes in Austria would require you to know the German language. But don’t let this discourage you. Some great degree programmes are taught in English as well. Especially postgraduate programmes have a higher chance of being English-based. You can also expand your horizons by taking a German language course while studying in Austria. Belgium Belgium is a diverse and beautiful nation located in Western Europe. It has a seat in the European Union and NATO and has three national languages – German, French, and Flemish. The nation also houses 45,000 international students on average. Belgium offers world-class education at a pocket-friendly price. These traits make Belgium a preferred destination for Indian students hoping to pursue their higher education in Europe. Living in Belgium Accommodations in major cities like Brussels can be expensive, but more affordable options are available for international students. Besides accommodation, you will also have to consider transportation when calculating your monthly expenses. The cost of public transportation in Belgium is reasonably low, and you will also get a student discount. If you live close to your university, you can save money on transportation by walking or riding a bicycle. Universities in Belgium There are numerous world-class universities in Belgium. The most prestigious in the nation would be the Katholieke Universiteit Leuven or KU Leuven. It is ranked 45th best in the world by the Times Higher Education University Rankings 2020. It is also the largest university in the nation, with around 45,000 students studying simultaneously. Here’s a list of top universities in Belgium for Indian students Regarding the average tuition fees in Belgium, you will see a stark difference between the Dutch-speaking Flemish and French-speaking Wallonia regions. In the Flemish Region, university fees can range between ₹77,610 and ₹4.9 lakhs for non-European students. On the other hand, the university fees in the Wallonia region would average at around ₹3.4 lakhs. It is noteworthy that the fees might be higher for medicine and business degrees in both regions. France France needs no introduction. It’s a lovely country in Western Europe. It shares its borders with Germany, Belgium, Luxembourg, Switzerland, Monaco, Andorra, Italy, Spain, and the Netherlands. It’s a country with picturesque landscapes, endless vineyards, fairytale-like cities, etc. The nation also offers quite a unique academic experience. It provides a dynamic and sophisticated environment for students to thrive. France has been a European and global pioneer of philosophy, culture, arts, and science for centuries. France is also a centre for global business, technology, and tourism. Living in France According to a 2020 study conducted by the National Union of Students of France, a student would require ₹1.08 lakhs per month to cover living expenses in Paris. Considering that Paris is the most expensive city to live in France, this is quite reasonable. Here’s the breakdown of costs, 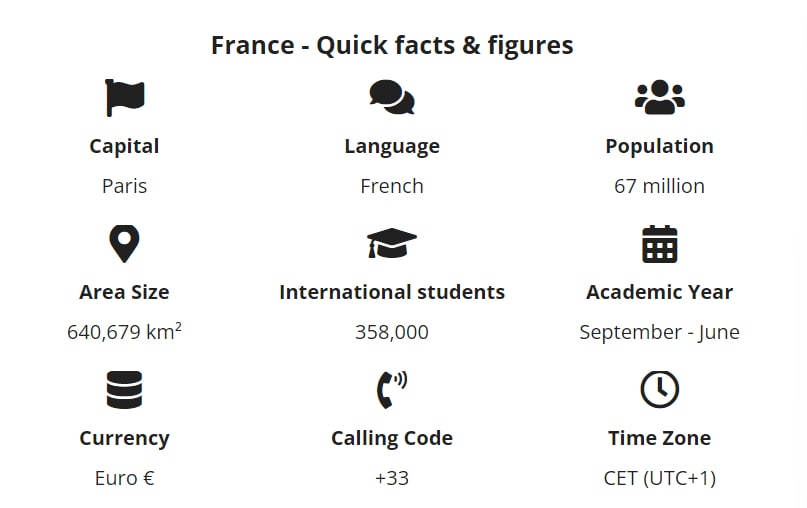 Universities in France France is the world’s 8th and Europe 5th among the world’s top study destinations. It is also 3rd in student preferences when considering experiencing a new lifestyle or culture. France is home to some of the greatest thinkers to have lived on this planet, like Foucault, Descartes, Jean-Paul Satre, Voltaire, and Simone de Beauvoir. France has several world-class institutions that you might find interesting. Some of them are, Universities of France offer quality academic, professional and technical degrees to students. Baccalauréat and degrees in France are awarded in three levels of achievement. France’s most popular areas of study include fashion, hospitality, tourism, technology, economics, and business. The Grandes écoles are public and private institutions that offer more intensive and specialized study programmes. They offer majors such as business, engineering, or public administration. Admission to these institutions can get pretty competitive. The average tuition fees were ₹15687/year for an undergraduate degree from a public university. Tuition for a master’s degree would go up to ₹21466/year in public institutions. For a private institution, you can expect to pay ₹2.28 lakhs/year and ₹3.11 lakhs/year for bachelor’s and master’s degrees, respectively. The United Kingdom According to the latest statistics, there are over 6 lakh international students in the UK. And this number will just keep growing in the future. Universities in the UK are recognized across the globe. The environment is culturally diverse, and the staff is highly skilled academically. And did you know that India is the second non-EU country sending the highest number of students to the UK? The number stands at a whopping 84,555 students. 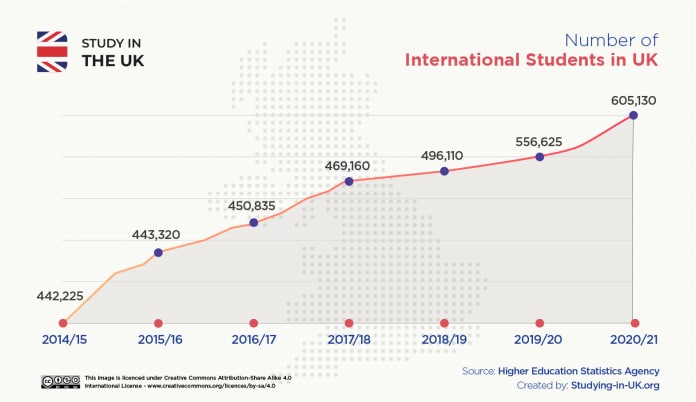 Living in the UK

The cost of living for international students can depend heavily on the type of accommodation you choose. Also, the cost might be higher in major cities like London. You can choose to live in forms or university accommodation or find a private flat or shared housing. Most universities allow you to live on-campus, a comparatively affordable option.

https://www.idp.com/uae/blog/living-cost-uk-for-international-students/#:~:text=As%20an%20international%20student%20in%20UK%2C%20you%20can,campus%20and%20can%20help%20you%20save%20on%20transportation
In addition, the average monthly transport cost can vary between ₹5300 and ₹4124 depending on the city you live in.
Universities in the UK
The universities of the UK are known around the world for their academic excellence. In addition to offering a world-class qualification, the UK offers a great overall experience. Universities in the UK are known for subjects like business, law, medicine, and other sciences. The below list has the 10 best universities in the UK according to QS World University Ranking 2020.
Top 10 Universities of the UK:

Let’s talk finances now. Usually, a master’s degree can cost less than an undergraduate programme because of the programme length. Overall, an international student might have to pay ₹13 lakhs on average for one year of master’s studies. A laboratory-based programme might set you back even more at ₹15.5 lakhs per year. Courses like medicine and business will generally cost even more.
Germany
According to Erudera.com, there are over 17,000 study programmes available at 380 universities in Germany. The country is one of the leading educational destinations in the world. There are countless top-ranked universities in Germany. Their degrees are recognized around the world and affordable too.
Living in Germany
Germany is considered an affordable nation to live in Europe. As an international student, you can lead a decent life in Germany with around ₹66,000 per month. The living cost can vary drastically depending on the city of your residence. Large cities can cost around ₹78,000, and small cities cost around ₹61,000 per month.
Average monthly expenses in Germany for Indian students

We hope you find your perfect country and university to pursue higher education. All the best!

Get online lenders to bid on your profile to get the best student loans.

Try Now!
Similar Posts
Student Loan To Study In Italy 2022: Top Banks, Interest-rate Comparison
Cost Of Studying In The UK For Indian Students
How to Calculate Cost of Living for Study Abroad Students?
Cost of Studying in USA for Indian Students: Visa, Living, Tuition, Accommodation and Others
List of Documents Required To Secure A Study Abroad Loan